This tour offers you an ideal way to explore the natural and cultural wonders of eastern Canada!  It covers major cities of English and French Canada including Toronto, Niagara Falls, Montreal, and Quebec City.

Note: Operation of this tour is subject to the evolving COVID-19 situation.

Day 1 – Arrive in Toronto.  Transfer to hotel on your own.  Rest of the day free to explore downtown Toronto.

Arrive in Toronto, Canada’s largest metropolis and its financial powerhouse.  The city offers with its multi-cultural population a cosmopolitan flair and celebrates the excitement of urban living while embracing its peaceful natural setting on Lake Ontario.
Toronto is home to a vast ravine system of protected green space.
The city boasts of year-round festivals; many of these free. Dominating Toronto's skyline is the CN that is iconic Tower. Although it no longer claims bragging rights as the tallest building in the world, it still soars a whopping 553 meters (1,853 feet) and is as jaw-dropping as ever.
Explore the cobbled lanes of the Distillery District historic site, a 13-acre urban hub of art galleries, indie boutiques, craft beer brew houses, artisanal coffee shops, and restaurants such as trendy El Catrin, known for its small-plate Mexican dishes, mezcal menu, and bold Day of the Dead decor.
Toronto Islands, a pastoral archipelago in the Toronto harbor. Wander the blissfully car-free lanes among pastel-hued cottages on Ward’s Island, entertain the kids on the rides at Centreville Amusement Park, or join the bohemian crowd at Hanlan's Point Beach, Toronto’s only official clothing-optional beach.
Overnight in Toronto, ON.

Day 2 – Full day tour to Niagara Falls including admissions to Hornblower Cruise – Voyage to the Falls.

Departing in the morning, your tour will drive to Niagara Falls.  Enroute, you will drive through Niagara’s wine country for a visit to one the award-winning Niagara Winery with Wine Tasting.  Your tour including admissions to the Hornblower – Voyage to the Falls Cruise (May to November; replaced by Admissions to Skylon Tower Observation Deck December to April), Stop for photos at Niagara Parks Floral Clock and at the Whirlpool Rapids & Niagara Gorge and three hours free at Niagara Falls for lunch and sightseeing and shopping.
This is a full day tour departing your hotel in the morning around 8 AM.  The tour will depart Niagara Falls around 4 PM and you will arrive back at your hotel around 7 PM.
Overnight in Toronto, ON.

Today is a day free in Toronto.  Spend the day exploring Toronto.  Opt for one of the optional sightseeing tours we offer including a City of Toronto coach tour.  Alternatively, you can prebook and purchase admissions to
CN Tower: dominates the Toronto skyline.  The tower soars a whopping 553 meters (1,853 feet) and offers as jaw-dropping views of the city and its waterfront.
Ripley’s Aquarium: features over 20,000 marine animals. Ripley’s Aquarium of Canada in Toronto is the place to see awe-inspiring underwater wildlife creatures from all over the world.
Royal Ontario Museum: The Royal Ontario Museum with its six million things in their collection, including an extraordinary gallery of dinosaur fossils.is certainly one of Toronto’s top tourist destinations.
Toronto Harbour Cruise:  This cruise provides you unmatched views of Toronto’s famous landmarks and islands. The boat offers lots of outdoor space with seating.
Overnight in Toronto, ON.

This morning, check out of your hotel and transfer to Toronto’s Union Rail Station. The VIA Rail train depart Toronto at 12:15 PM and after a 4 ½ hour journey arrives in downtown Ottawa at 4:45 PM.  On arrival, transfer on own to your hotel in Ottawa.
Later this evening, spend your time to see the Parliament Hill by night.  Dine at one of the many patio restaurants in Ottawa’s Byward Market.
Overnight in Ottawa, ON.

Today, before you set off on your tour, you should pack your bags and check out.  Make your way to the tour boarding point at 59 Sparks Street (at the corner of Sparks Street and Elgin Street, across from Parliament Hill) in downtown Ottawa for a full day Hop-on Hop off tour of Ottawa.  The tour takes you to Parliament Hill, past Embassies, Parks, Museums, the Byward Market, and the Rideau Canal.  On this tour, client’s have access to 75 sites at more than a dozen strategically placed stops. The ticket is valid for the day.
Late afternoon, depart for Montreal by VIA Rail Your train depart from Ottawa at 4 PM, arriving in Montreal at 6:00 PM.  On arrival, transfer on own from Rail station to your hotel in downtown Montreal.
Overnight in Montreal, QC.

On this 3 ½ hour fully narrated motor coach tour, you will gain valuable insight into the history and character of one of the world’s largest French-speaking cities and point out its many museums and sites of interest such as Old Montreal, Notre Dame Basilica, City Hall, the Olympic Stadium, Mount Royal Park Lookout and Saint Joseph’s Oratory. The tour will make a stop at the beautiful Notre Dame Basilica (entrance not included), residential and financial districts, historic Old Montréal, an outside view of the Olympic Complex, the campus of McGill University and the panoramic view from an observation point on top of Mont Royal.
Rest of the day for the many optional tours we offer.
Overnight in Montreal, QC.

The tour explores Québec City, the historic heart of French Canada and the surrounding region.  Your tour coach will visit Québec City’s top attractions, including the UNESCO-listed Old Québec, Place Royale, and the Plains of Abraham. Post the tour of Quebec City, the coach will depart the city, venturing into the scenic countryside for a visit to Montmorency Falls.  Sitting about 9 miles northeast of Old Québec along the St. Lawrence River, the waterfalls are 83 m (272') tall, a full 30 m (99') higher than Niagara Falls.
Later this afternoon, depart on your trip back to Montreal.
Clients must make their own way to the tour boarding point in downtown Montreal at 1255 Rue Peel, Montréal, QC H3B 2Y1, Canada.  The tour takes approximately 12 hours to complete you can expect to be back in Montreal by 8 PM.
Overnight in Montreal, QC.

Check out of hotel and transfer on own to Montreal Airport.
End of your Essentials of Eastern Canada Tour.
Did you find what you were looking for?  Let our Canada destination specialists take the stress away and tailor a holiday that suits your interest and wallet.
Are you travelling as a group of 10 persons or more? Check with us for our special group rates including transportation.
Contact our Canada Destination Specialist

Note - The operation of this tour is subject to the evolving COVID-19 situation. 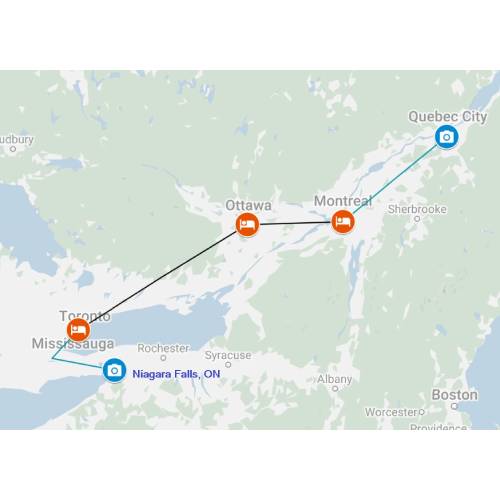